In early 2015, we were invited to develop the visual identity and environmental graphics for the basement bar of 277 Flinders Lane, a historic Victorian building in the heart of Melbourne.

We were thrilled at the prospect of working closely once again with the dynamic Millett family, with whom we created the iconic Wake Up! accommodation concept. Having identified an opportunity in Melbourne’s late night bar scene, their large-capacity venue would offer beverages, bar food and live music to a young, urban crowd late into the night.

After an intense period of research into the building’s history and the distinctive (and often very naughty) Victorian era, it quickly became clear that this would be the project of a lifetime.

Research and History
During our initial research into this historic Victorian building, we gradually uncovered a story rich in personality and drama that would ultimately inform every detail of the visual language of the venue.

Tomasetti House as it is currently known was built in 1850 by brothers William and Charles Degraves as a warehouse for their business as merchants and millers – William Degraves & Co. It originally housed a steam flour mill, a boiler and horse stables. 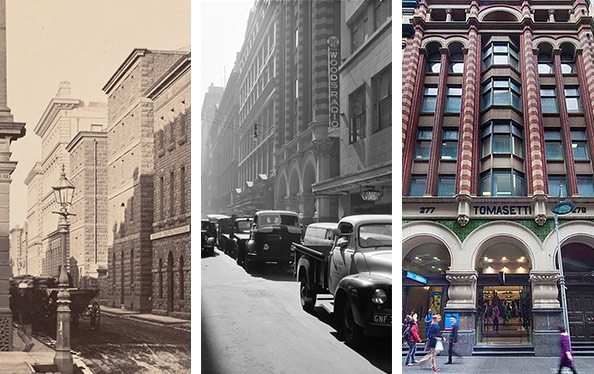 We discovered that Messrs William and Charles Degraves had a colourful family history, full of scandal and deceit as well as feats of great industrialism.

Their paternal grandfather, Pierre Degravers was born in France and practised as a medical physician. He was later disgraced after making false claims about his power to cure blindness and raise the dead. His sons, Peter and Henry changed the family name to Degraves to escape the shame he brought upon them.

Peter Degraves, the father of William and Charles, was an engineer, shipbuilder and factory owner who came to Australia in 1924, and constructed the Cascades sawmills. In 1832 after a five year imprisonment at Hobart Goal he built the Cascade Brewery in Hobart and soon added a flour mill and bakehouses. When the Gold Rush began in 1851, he regularly sent timber, flour and beer to Melbourne to satisfy the demand of the growing population which made him a very wealthy man.

Peter is also known to have fabricated much of his own personal history and is well documented as a thief, a bully, a con man and a liar. In later life, William Degraves fought the Lands Department for failing to protect the rights of landowners and consequently died a relatively poor man.

These incredible true stories which spanned three generations provided us with great inspiration for a distinct brand and a unique visual language to promote the venue while keeping their legacy alive as the Degraves name ended with William and Charles.

The research revealed several naming options for the venue, but it was the simplicity of ‘The Mill House’ that won out – the Degraves brothers who constructed the building in 1851 were millers and the site was originally a flour mill.

With this name in mind, we immersed ourselves in typographic styles of the nineteenth century to inform the visual identity and to create an authentic link to the building.

After the industrial revolution, a new wealthy class emerged – the nouveau riche. They desired ornamentation and extravagance to counteract the brutality and austerity of the previous years. Buildings, furnishings, fashion and print were all embellished with decorative elements during this period.

We explored highly decorative typographic design with elaborate curves and intersecting character forms to create a distinctive brand identity for The Mill House.

While this identity represents the visual excess of the Victorian era, it also stands alone as a contemporary word mark for application across all touchpoints including signage, print collateral and digital media.

A large wall graphic at the end of the bar tells the story of the Degraves men in formal Victorian language and is presented as a rebus word puzzle. Rebuses – or pictograms – use pictures to symbolise words or parts of words and were a popular form of entertainment in the Victorian era. 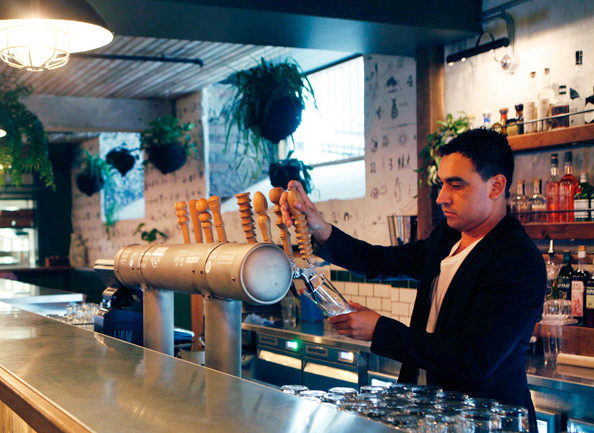 See the pictogram and read the translation >

In this installation, the words are represented in pictures, sometimes as a literal representation of the word, sometimes as a short visual pun, and sometimes representing a syllabic sound, adapting pictograms into phonograms.

This pictorial story provides the venue with a unique brand asset, as well as a truly engaging visual language that works well on social media, in product promotions and on other graphic touchpoints.

It is also an invaluable device that will continue to entertain and challenge patrons well into the future. 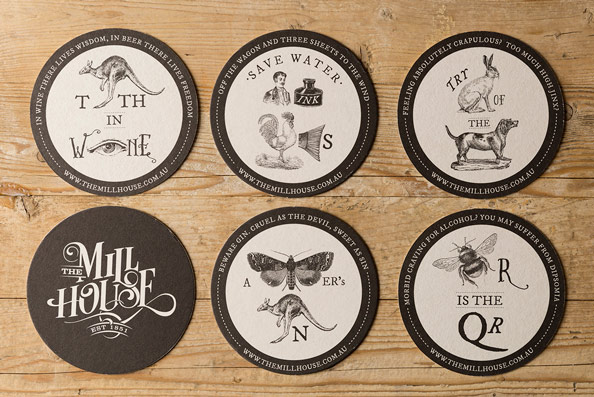 The Cabinet of Curiosities

In order to fully represent and celebrate the incredible lives of the three Degraves men, we created The Cabinet of Curiosities.

Clearly visible as soon as one descends the grand, original staircase and enters the subterranean venue, The Cabinet of Curiosities is a three dimensional collage of collectibles. Each piece was carefully chosen to celebrate these unique characters.

Historically, Cabinets of Curiosities first became popular during the Northern Renaissance in the fifteenth century, and reached the peak of their popularity during Victorian times. While scientists once kept their most prized specimens hidden away, Victorian society types proudly displayed their most impressive finds for all to see.

The objects tell The Mill House story, both symbolically – handcuffs to represent Peter Degraves’ incarceration and examples of antique quackery suggestive of Pierre Degravers’ medical deceit – and literally, with genuine artefacts from the era, including beer bottles from the Victorian Gold Mining days and a steam pressure gauge from this time.

The heritage building in which The Mill House is located provided many unique opportunities for interesting installations so we designed an eclectic range of signage and graphics to inform, entertain and adorn.

A traditional ‘Public House’ hanging sign welcomes pedestrians as they walk down Flinders Lane. This has been designed with Victorian-era typographic styling and was hand painted and embellished with gold leaf detailing. An opulent entrance statement also features hand-applied 23k gold leaf. 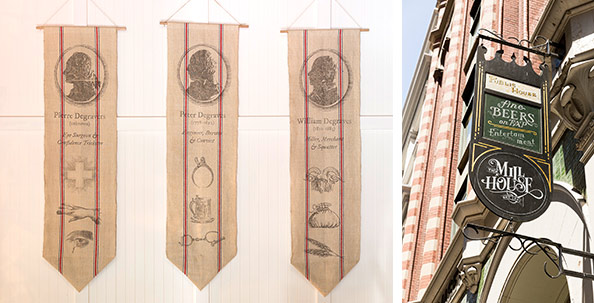 Upon entering The Mill House, three vertical banners introduce three generations of Degraves men before you descend to the impressive bar. Printed on 150 year old grain sack fabric using a hand-rubbed transfer process, the banners depict the men in Victorian-era silhouettes, with pictograms representing the key characteristics of each man.

Other signage details include cheeky, hand-painted pictogram toilet signage, a collage of risqué and kooky Victorian photography on the toilet ceilings and a tongue in cheek ‘Code of Conduct’ sign.

A large wall graphic at the end of the main bar tells the story of the Degraves men in the form of a rebus word puzzle or pictogram, a popular form of entertainment in Victorian times.

The back wall in the DJ booth features a neon logo. In sharp contrast with other nineteenth century graphic details in the venue, this statement sign celebrates the new purpose of this historic building.

See more signage and environmental graphics at The Mill House >