Looking back at 25 years in business with COVID-coloured glasses - Holy Cow!

Looking back at 25 years in business with COVID-coloured glasses

In previous blog posts, I’ve written about how the ‘WHY?’ is now so often missing in design, causing quality and sustainability to be sacrificed. As I commemorate 25 years this year since I founded Holy Cow!, I thought that reflecting on WHY I first established the business would be a good place to start.

In 1995, I bought my first Apple Mac*, a printer and a fax machine to set up Holy Cow! in the sunroom of my flat in Kirribilli.

“Holy Cow!” seemed like the perfect name for my burgeoning business as it not only referenced an exclamation of surprise and delight, but also alluded to my love of cows and my long-time nickname, Moo.

Through that magic combination of preparation and opportunity (ie. luck), I was fortunate enough to have a great foundation client – Macarthur Square Shopping Centre in Campbelltown, south west Sydney. Managed by Lendlease, I soon started working for their head office and several of their other retail centres. (I’m also proud to say that we have worked with retail shopping centres every single day for the last 25 years and continue to do so.)

Left: My brother Luke, Emma Gray (who is still our Creative Director) and me Right: A client meeting at our first office in Alfred Street, North Sydney

Emma Gray, our fabulous Creative Director joined me, we grew some more and we then became early pioneers of the Surry Hills creative community, renovating a dilapidated warehouse space on Commonwealth Street in 2001.

I have been asked many times over the years why I started my own business.

This is the reason I always give:

I founded Holy Cow! in 1995 in response to a growing need for boutique agencies that cared about design and cared about their clients.

In the early nineties, the agency landscape in Sydney was dominated by large international advertising agencies, mostly headed up by British male ex-pats. Graphic design was usually a small department within these agencies, and not of huge importance. There were a few well known graphic design legends (again, predominantly male) and only a few independent companies that specialised purely in graphic design.

After the recession of the early nineties, many companies at that time had grown increasingly discouraged with the perceived lack of service and the high prices of large, international advertising agencies so they began to seek out alternatives – smaller, independent agencies.

These smaller agencies were often overlooked as companies traditionally preferred the full-service agency model – creative, advertising and media all under one roof. The rise in these small creative shops gave the internationals a run for their money as companies began to realise that they didn’t need to pay big multi-national prices to get world-class creative services.

These companies were then happy to source a range of creative services from a complementary team of small players. (We are now seeing an online version of this trend again, fuelling the gig economy.) 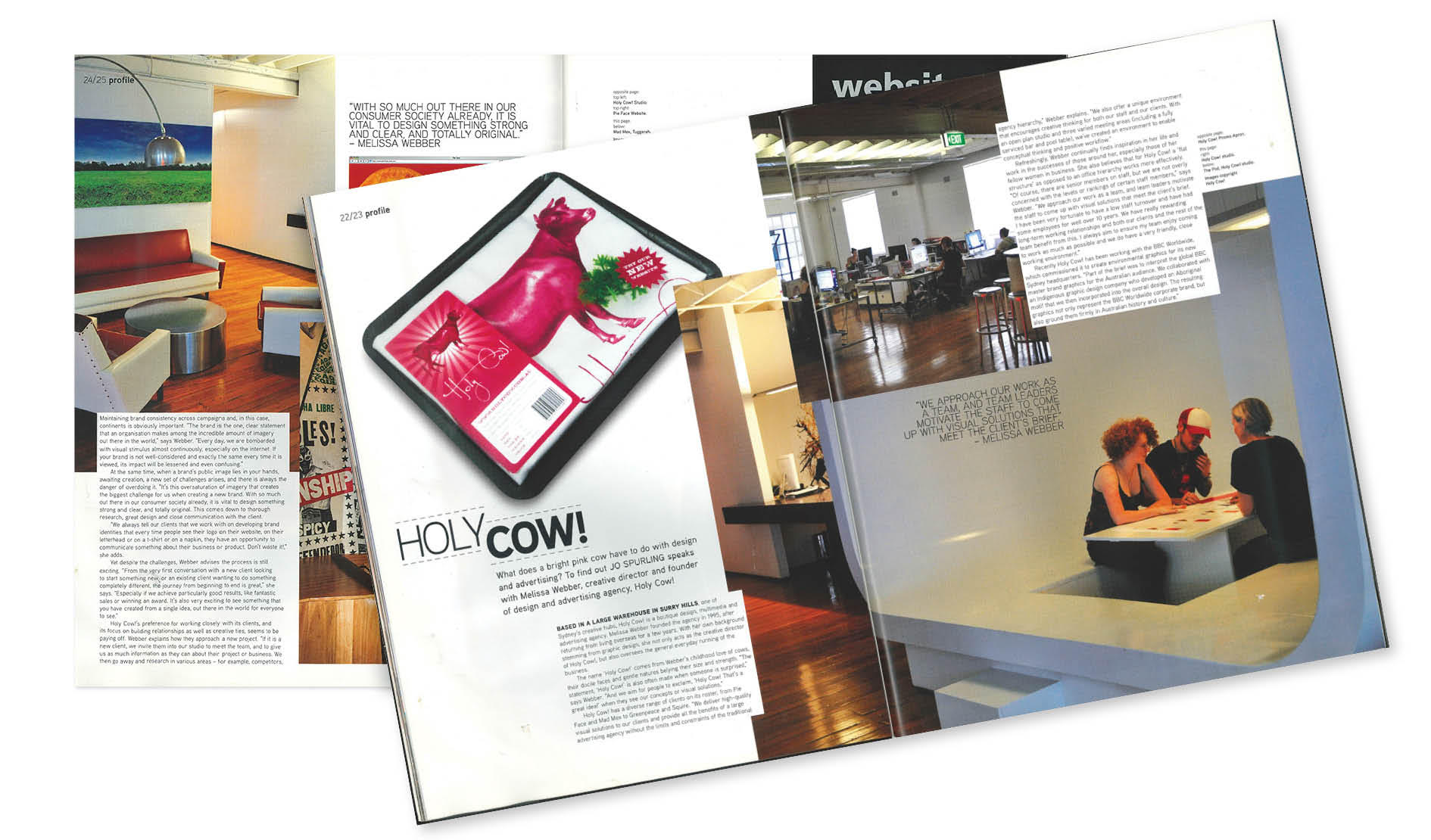 A feature in Desktop Magazine in 2010

We fast became an extension of our clients' marketing teams and forged long-standing partnerships and friendships, many of which are still going strong today.

But there is another reason too.

I always wanted to run my own business. As a child, I started wheeling and dealing as soon as I could – feeding pets, watering gardens, ironing, babysitting and baking (which was just called ‘cooking’ back then!). I loved the idea of running a business, creating something from nothing and doing something useful to help other people. 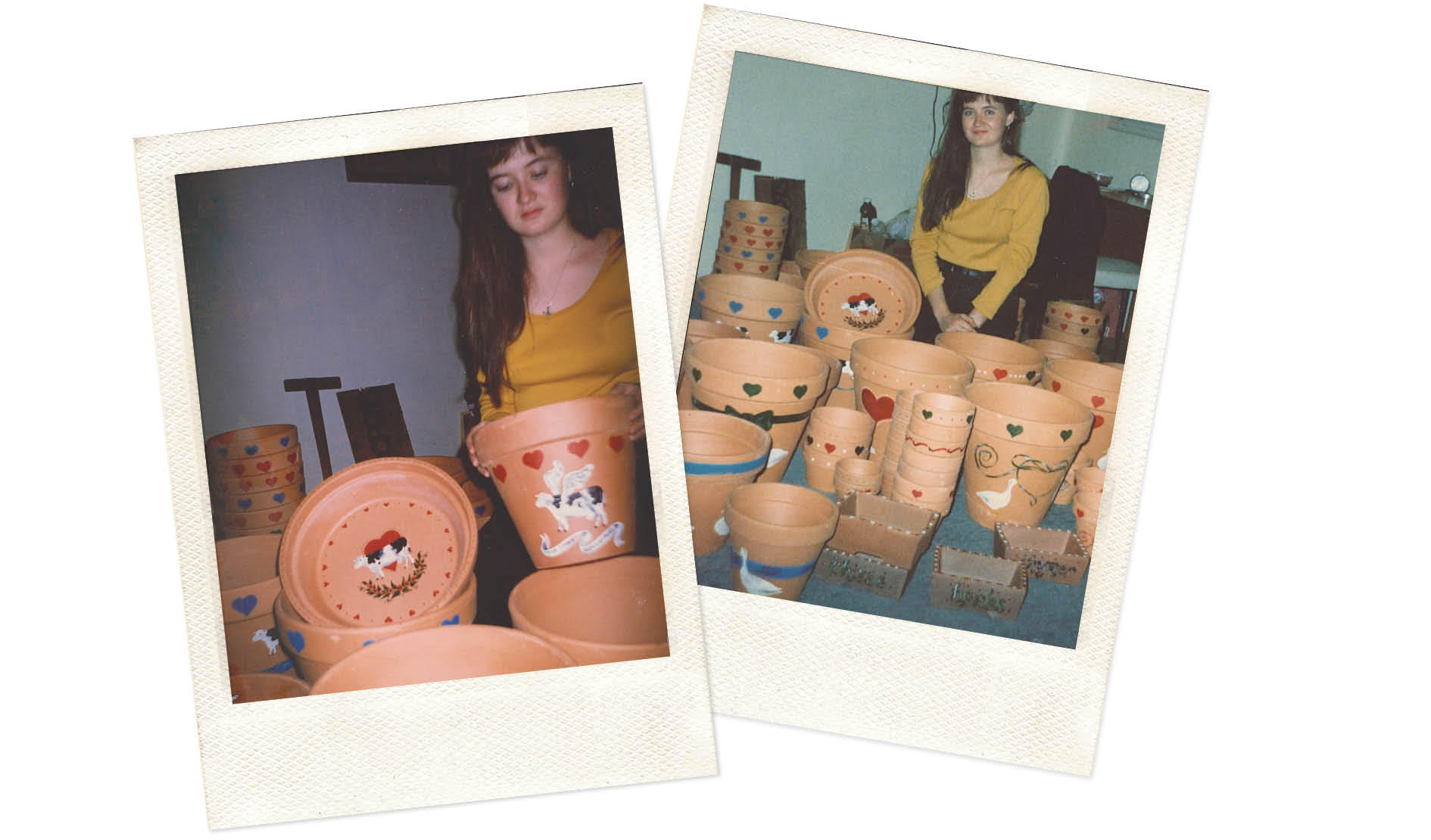 One of my early side-lines, hand-painted Moo Pots

After training as a graphic designer and working in agencies in Canberra, Sydney and London, I wanted to start my own business as soon as I could but knew that I needed some business experience so I accepted a great job as an Art Director in an agency in Sydney. By the end of the first week, I knew that I had made a terrible mistake as I was really just a glorified “Mac Operator” – the worst job in the world for a qualified graphic designer! (Thankfully, that job description has almost disappeared.)

Let’s just say that the owner (see above: British male ex-pat) treated men and women very differently and believed that giving positive feedback and thanking staff was counter-productive and would make them lazy.

He taught me exactly how to treat people and how to inspire team members – just do exactly the opposite of what he did.

I will be forever grateful to him. 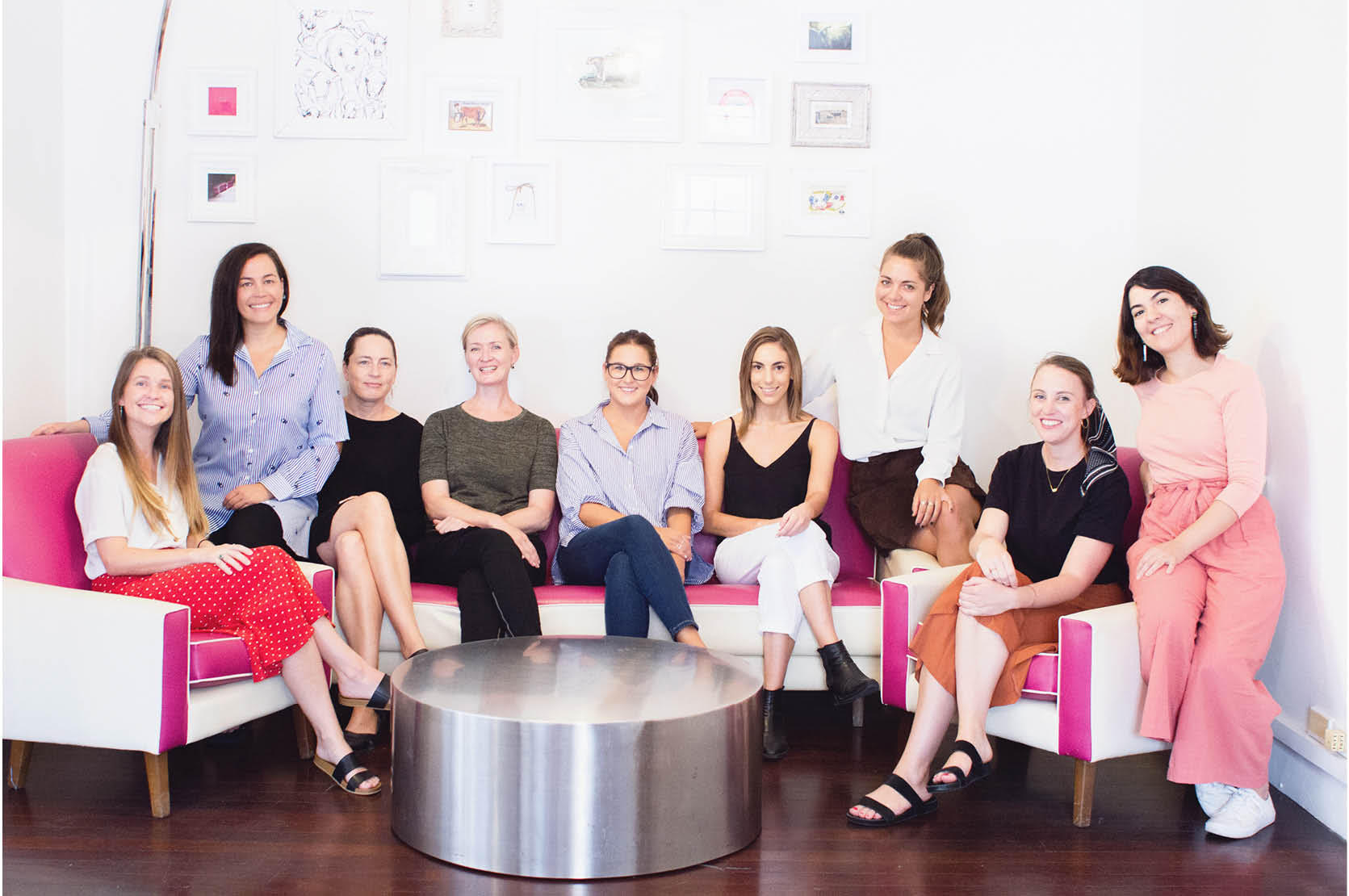 My amazing team in 2019, minus Yolanda and Jordan (who took the pic!)

I have been blessed with an exceptional range of team members over the years, most of whom have been women. In the last 10 years, they have largely been Millennial women. I share with them my stories of Horrible Bosses and the blatant sexism that I have encountered over the years because it reminds me how much far we’ve come. Most of the time, I am sure they think I am joking…

In 1995, it never occurred to me that I couldn’t run a business because I was a woman, but it definitely occurred to many of the people that I have dealt with since. .

Being introduced as the Managing Director then being asked (to my face!) who really runs the business does get a little old, but it’s no wonder – in 1995 when I started Holy Cow!, approximately 31% of all Australian business operators were women. In 25 years, this figure has only risen to around 34% today, not even taking into account the impact that COVID-19 has had on small businesses this year. 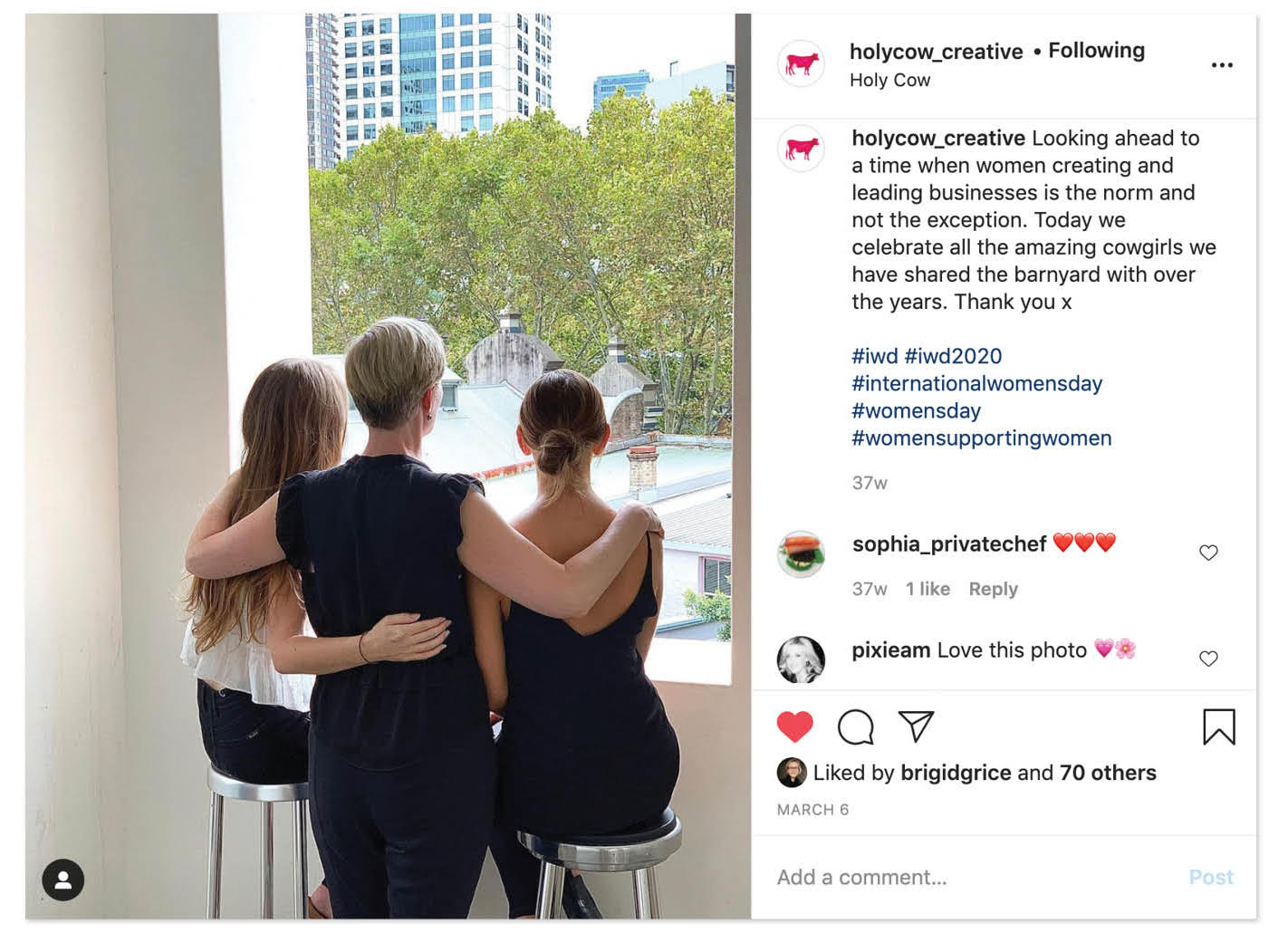 Looking ahead to a time when women creating and leading businesses is the norm and not the exception.

To paraphrase Sheryl Sandberg, we really need to get to the point where women are known as leaders and not as 'female leaders'.

Reflecting on the last 25 years with covid-coloured glasses, I am now perversely pleased that I experienced both the turbulence of 9/11 in 2001 and the shocking impact of the GFC in 2008. I understand the highs and lows of both running a business and guiding our team and our clients through yet another difficult chapter of our shared history.

After 25 years, above all, I am so thankful to have had the opportunity to run a fully independent creative agency, have a family, collaborate with so many stand-out brands and organisations, and work with some of the best people in the business.

The years have been kind to us and given us so many opportunities to learn and to grow and to benefit from all the experience we have gained as creatives...and as humans.

Thank you to everyone who has been part of my journey this far – all my incredible team members, our fantastic clients, our collaborators and our suppliers, and our friends and families.

I still remain inspired and optimistic...and never short of a cow pun or two.

• The day that the amazingly-talented creative powerhouse, Emma Gray joined our team. She is still with me after 23 years. Respect.
• The luxury of having two maternity leaves because of my amazing team members.
• Providing pro bono services to Sisters of Charity Outreach, (now Open Support) for over 20 years.
• Being able to take my dog to work.
• Hosting a session at Vivid Ideas – How Generation X Women Shape Creativity.
• Our first Holy Cow! marriage and subsequent Holy Calf – bless you, Liv, Jords and Elliot.

• Losing my beautiful brother, Luke, beloved by both staff, clients and suppliers.
• Taking my fax machine in my suitcase on a trip to London so I could proof-read press ads. I know.
• Being told to “Wear a short skirt to get the job and a long skirt to keep the job.” True story.
• Realising that my first baby would not “just fit in with my work schedule”. (The other one didn’t either, surprisingly.)
• Realising that covid-19 was kind of a big deal.
• Not seeing my beautiful team members every day in person during lock-down.

* For the Mac nerds, it was this one

To celebrate 25 years, we put together 25 of our favourite creative projects – see them here >

Read our blog about 25 years in the design business >